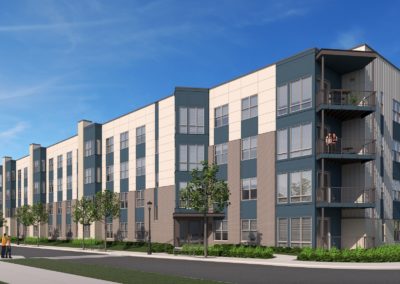 The owners of University Station are adding an additional phase of student housing to their mixed-use development adjacent to Xavier University’s campus called University Station. The new four-story housing complex has 49 units with 128 beds and contains a unit mix ranging from efficiencies up to five bedrooms. Terrex Development and Construction is leading the development of the new project and Messer Construction Co. is the design-builder in partnership with M&A Architects.

The new building was designed by M+A Architects to provide a great living experience for the student residents.  The building itself is designed with modern WiFi and fiberoptic technology infrastructure throughout the building, all units include quality finishes, all bedrooms have their own bathrooms, and several of the units feature balconies with views of Xavier’s campus.

When deciding whether to build additional units, the ownership group looked at demand for its existing units at University Station and at the number of Xavier students that are available to live in housing at University Station.  Occupancy for the first phase of student housing has been 100% since it opened, and Xavier University continues to grow its student population.  Additionally, today many students are forced to live in houses in the surrounding neighborhoods because of a lack of supply of quality housing options near campus; when an apartment community immediately adjacent to campus would be a superior solution.